April 2020: ​Staying at home to make a difference

February 2020: More is better when it comes to predator driven biotic resistance

When thinking about the ability of predators to resist invasive prey, we often focus on the interaction between a key predator and a newly arrived prey. However, the  presence of multiple predators can lead to variation in their behavior and ultimately alter the risk for shared prey. In recent work that formed part of Lisa Skein's PhD we compared the prey selection of whelks and rock lobsters when co-occurring and when feeding in isolation. When alone, both predators preferred the native mussel Choromytilus meridionalis, regardless of the abundance of alternative prey. However, when predators shared access to mussel prey, predation risk of the invasive mussel Semimytilus algosus, increased. This was largely driven by the rock lobsters eating a more varied diet in the presence of the whelks. This finding highlights the need to account for multiple co-occurring predators when assessing the potential for biotic resistance against prey invasions. It is typically South African to think that if a little is good, more must be better - maybe when it comes to biotic resistance we have been right all along.

Coastal regions face ecological and socio-econonic changes. Understanding the full context of these changes  is often hindered by the need for cross-disciplinary knowledge transfer.  In an effort to better understand the changes that have taken place in False Bay over the last 30 years, and the implications for the biota and people of the Bay, 32 researchers recently put their heads together. The result is a wonderful holistic synthesis of three decades of change in the oceanography, biology and human dimension of False Bay. This collaborative approach has helped to identify  responses to different management approaches and to better understand the implications of changes in human settlements and marine biota.  Notably the number of alien species known from the Bay has increased. This likely reflects the spread of a number of alien species from the west coast, the surveying of previously unsurveyed habitats and the discovery of alien species new to the country. For detailed more information read the full paper.

Because of the challenges associated with managing alien species in a marine context, it is most effective and efficient to  focus efforts on preventing invasions. A useful tool for preventative management comes in the form of watch lists. These lists identify biota that are not yet present in the region of interest but could pose a threat should they establish. Watch lists are most effective when used in conjunction with routine monitoring programs, as new species can quickly be detected. Such a swift response increases the changes of successfully removing newly established alien species. As part of her MSc, Cher used horizon scanning and developed a watch list for predatory crabs. Because of the weak regulatory force exercised by predators along the South African coast, there are concerns that the region is particularly vulnerable to invasions by alien predators.

If you would like to know more this paper has recently been published in African Journal of Marine Science.

April 2019: Setting up predation experiments around the coast

January 2019: A new project focused on the interaction between climate change and invasions

The start of the new year sees an exciting new project kicking off in the Robinson Lab. Funded by the National Research Foundation we will be building an understanding of how predicted changes in pH and temperature might affect marine invasions along the South African coast. This project will underpinned by the development of a database of current  coastal ocean pH and temperature the accounts for spatial and temporal variability. Using this baseline we will then move on to assessing how future pH and temperature regimes might affect invasions through the combination of field and laboratory experiments.  Understanding how the environment might change in the coming decades and what these changes are likely to mean for native and alien biota are the first steps to developing approaches to conserve our marine systems.

Its been a busy few months with lab members attending a variety of meetings.

Tammy and Lisa attended the Xth ICMB in Puerto Madryn, Argentina. This was a wonderfully stimulating conference with attendees from across the globe. It was a great opportunity to see the most recent research before it hits the journal pages. We are very proud that Lisa won the award for second best student oral presentation. Tammy's plenary talk stimulated much discussion about the need to link management and research, and the fact that developing countries face major challenges in this regard.

Back home in Stellenbosch the lab attended the Centre of Excellence for Invasion Biology's Annual Research meeting. This year students were challenged to produce popular science articles for the The Conversation and 3 minute Fame Lab talks. This was a huge challenge but in recognition of the need to make science accessible to the public everyone gave it their best shot. Once again the lab name was held high as Katie was the prize for best popular article by an MSc student. Well done Katie!

August 2018: There is a desperate need for basic ecological knowledge, even for well studied taxa like crabs

In a recent global review of invasions by marine predatory crabs, we highlighted that a lack of basic biological knowledge for the majority of species poses an impediment to identifying traits associated with invasion success. This was somewhat surprising as crabs are large, conspicuous and commonly considered to be a well-studied group. There is a dire need to address this gap, not only for crabs but for other taxa as well.  Only through deepening and broadening our foundational knowledge of the ecology of marine groups can we begin to understand the traits that predispose biota to being successful invaders.

February 2018: Getting ready for ICMB-X in Puerto Madryn, Argentina

Every few years marine invasion biologists from all around the world get together to share their insights, findings and enthusiasm for marine systems. The next exciting event will be held in October this year and is being hosted by the Society for the Study of Marine Bioinvasions and Grupo de Ecologia en Ambientes Costeros. Preparations are underway... See you there!

May 2017: The need to quantify impacts of marine alien species

January 2017: Into the subtidal

September 2016: The beauty of Langebaan Lagoon

Roughly 100km north of Cape Town lies a very special spot. Enclosed within the West Coast National Park, Langebaan Lagoon represents a unique system along the South African west coast.  Offering protected sandbanks and seagrass beds more typical of the south coast, and a stop-off to many migrating birds,  this location holds special significance to many nature lovers. Not least of these are the many students who have been privileged enough to cut their ecology teeth in this special system.  This photo was taken from the Geelbek bird-hide by Tammy while spending some time with a group of visiting marine biology staff and students from Plymouth University. 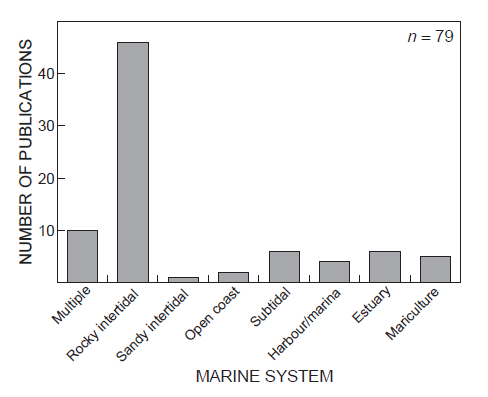 While invasion biology is a growing field, South African marine invasion biology demonstrates this trend perfectly. The first paper was on marine invasions was published in 1990 by a group from George Branch's lab and focused on the detection of the European shore crab Carcinus meanas in Table Bay harbour. Since then the number of papers published has steadily increased with a total of 79 papers appearing the peer reviewed literature by the end of 2014. A recent review has, however, highlighted that much of this work has focused on describing invasions in intertidal systems. This has lead to a call for more experimental research focused on the spread of alien species and their associated impacts. Read more about this topic in a paper recently published by our lab in collaboration with the SANBI Marine Programme and the SeaKeys Project.

﻿Dr Mhairi Alexander: Moving on to establish her own lab 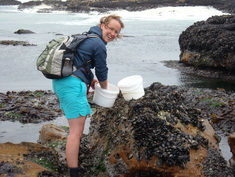 Mhairi Alexander, who was previously a postdoctoral researcher with the Marine Lab has now made the move back to Scotland to take up a lectureship in Animal Behaviour at the University of the West of Scotland, based just south of Glasgow. In this role Mhairi will be teaching on a range of modules on the role of behaviour in animal interactions, a subject area that much of her research has focussed on. She plans to continue her work in South Africa and will maintain strong collaborative links with the Marine Lab.